Beginning of the walnut harvest season in Iran 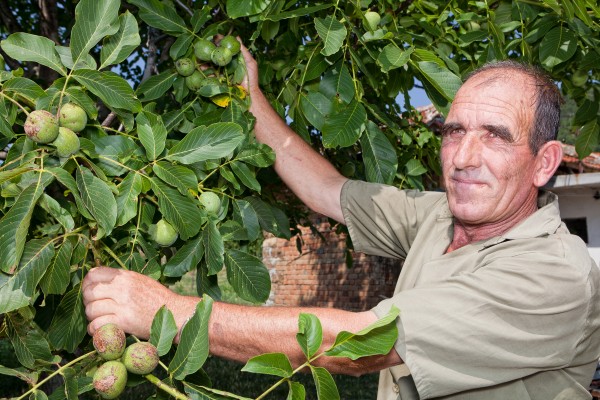 GILAN – With the start of the walnut harvest in Gilan, gardeners are expected to harvest twice as many as last year’s walnuts. It is expected that more than 4.000 tons of crops will be harvested from 1.500 hectares of walnut orchards in Kangavar city this year. Iraq, the United Arab Emirates, Qatar, and Kuwait are Iran’s most important destinations for walnut export this year.

According to the Agricultural Organizations, it is expected that Gilan gardeners will harvest more than 6.140 tons of walnuts worth 434.400.000.000 Tomans this year. They harvested not much due to untimely rains last year. Most walnut orchards are located in the cities of Amlash, Rudbar, Siahkal, Rudsar, Talesh, Astara, and Rezvanshahr. 19.050 farmers grow walnuts in Gilan.

According to the Kangavar Agricultural Organizations, the average function of walnut orchards is about 3,5 tons per hectare in this city. Unfortunately, part of Kangavar Gardens has been destroyed this year due to frost. Kangavar walnuts are of the improved and native type of the region. So it is considered as one of the best walnuts in Iran in terms of quality, which has many fans. Kangavar orchards are also equipped with drip irrigation systems, which save significant water consumption. Walnut harvest in Kangavar begins in late August and continues until mid-September.

From late March to late June 2021, Iraq was the most important export destination for Iranian walnuts. During this period, 4.470 kilograms of walnuts were exported from Iran to Iraq, most of which were exported to this country through the Bashmaq border of Kurdistan. After Iraq, the United Arab Emirates has been the second-largest export destination of this product by importing 2.600 kilograms from Iran. After these two countries, Qatar with 2.372 kg and Kuwait with 1.170 kg, are the next places for importing this crop. In these three months of this year, due to last year’s low yield of walnut trees and being in the last months of the crop year, a small number of walnuts was available. Exports are expected to increase significantly in the coming months as the walnut harvest season begins.