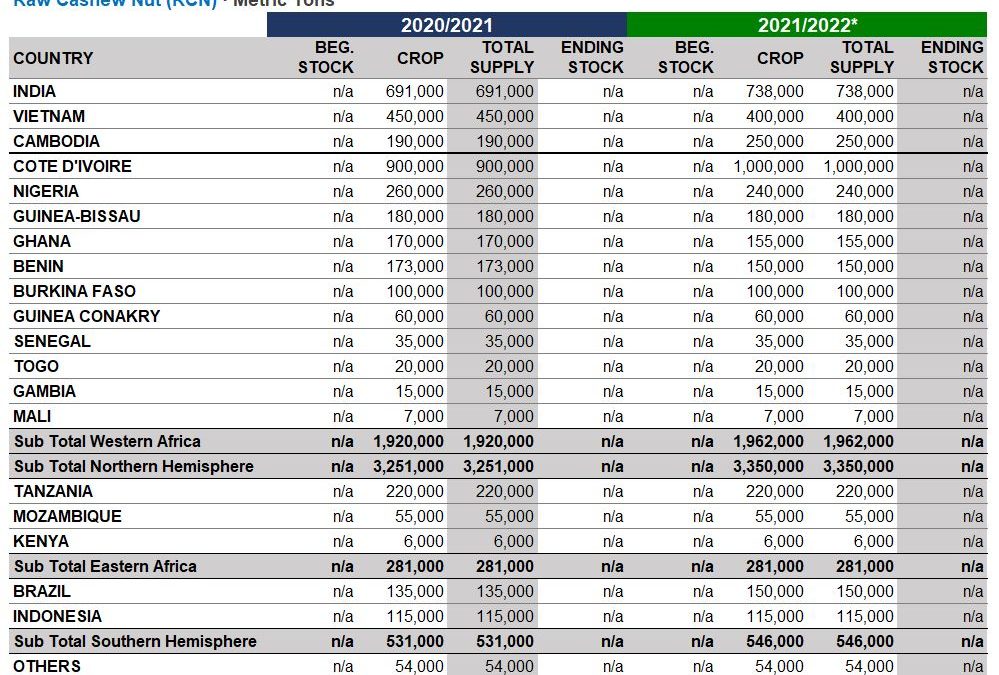 With industry reports of the Côte d’Ivoire crop reaching around 1 million metric tons of RCN, northern hemisphere crops (West Africa, India, Vietnam and Cambodia) might end up slightly higher than last year, around +3%. India, Vietnam and Cambodia combined crops seem to be about 4% up from last year (the year-on-year rise in the Cambodian and Indian crops, 32% and 7% respectively, compensate the 11% y/y drop in the Vietnam crop). Shipments from West Africa were delayed, giving the initial impression of a short crop, but shipment numbers and stock positions indicate that overall, the crop has increased a little; the total West Africa crop is about 2% up y/y. Most of the West Africa raw material has already been sold and is by now in hands of large RCN traders. Significantly more raw cashews were processed in West Africa and exported as kernels this year, aided by the advantage of much lower shipment costs and time-savings, particularly on exports to Europe.

COVID-19 induced shutdowns of factories in Vietnam in August and September slowed down the pace of shelling of raw cashews. This, coupled with significant shipping delays and cost-increases has caused spot-shortages and price-escalation of kernels in many destination markets. At the time of writing this report, demand was doing well across all geographies.

Regarding the southern hemisphere, harvest started in September in both Brazil and Indonesia, and East Africa harvest was expected to start as of early October. As per the Brazilian Institute of Geography and Statistics (IBEG), Brazilian crop is projected to be lower by 11% compared to last year crop, while local industry sources report that expectations are of a good harvest that might reach up to 150,000 MT of RCN. The Indonesian crop is foreseen to remain the same as last year. The Tanzanian crop condition is good, and initial projections indicate that it may reach up to 250,000 MT.