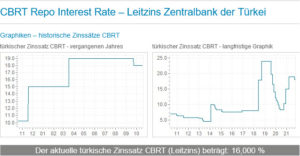 This week it became clear that political factors cannot be planned and that surprises must always be expected in the case of Turkey. After last month’s surprising and significant interest rate cut, the central bank meeting scheduled for Thursday was eagerly awaited. In the run-up, there were already rumours that another interest rate step could be imminent. A few days before the meeting, however, the mood in the market was such that it was firmly expected that the interest rate would at least be held constant. But the opposite has happened. With another rate cut of two percentage points, the market was entirely caught off guard a second time. As a result, the Turkish lira fell by another approx. 4% compared with the previous week and is now trading at an all-time low against the euro and the U.S. dollar.

This also hits many exporters at a very inopportune time. Usually, now is the time to buy and store raw materials. To do this, exporters have to take out loans. Because of the high-interest rates, these are taken out either in euros or U.S. dollars. The interest level here is about 4% for the exporters. If you were to take out loans in the local currency, the interest level would be around 20%. This is too high for the exporters because there is not that much money to be made in hazelnut kernels unless you are a speculator. Since the market has assumed that raw material prices are now more likely to rise than fall, exporters have also bought goods speculatively in some cases. However, the renewed sharp depreciation of the lira now makes stocks expensive since the loans have to be repaid in foreign currency. Therefore, the enthusiasm following the interest rate decision was limited.

Looking at the development of the key interest rate, further steps may follow. Presumably, the government wants to force the economy to reduce the negative trade balance. Citizens should buy more Turkish products and thus boost the domestic economy. In addition, favourable exports are to provide for more business. The problem is high inflation and high unemployment in the country. Turks feel that they have to tighten their belts, which leads to a bad mood in the country, which is now increasingly directed against the president. The president, however, continues to propagate nationalist tones and a strong Turkey. Internationally, however, this is causing ever-greater tensions. Relations with the U.S. have become much more strained since the change of government, and Turkey is also likely to lose one of its most essential advocates vis-à-vis Europe with the change of government in Germany. Just in this situation, the recent action, the “expulsion” of 10 diplomats, is a further low point of international relations. This could have an additional impact on the exchange rate. If no more conciliatory signals come from Ankara, the Turkish lira is unlikely to recover in the short term.

In addition to the political factors, however, a lot has also happened in the commodity market. While many European buyers continue to believe that a large harvest and the weak Turkish lira are driving the market, the mood in Turkey is different. As feared before the harvest, it now appears that the purchase price of the market leader was set too low for the development of the entire market. Thus, the significant difference (about 2 TRY/kg) has led to the TMO receiving a lot of raw material. Currently, it is already more than 70,000 mt. Despite the ample harvest, the market will probably lack this quantity in the second half of the season.

What many underestimated in the run-up to the harvest is the demand of the market leader. In an average year, the market leader buys about 250,000 mt (inshell) per season. This year, however, there will be an additional demand of probably 50,000 mt. Because the Italian harvest is small, a specific order will sooner or later reach Turkey. Moreover, the qualities in the alternative origins, such as Georgia and Azerbaijan, are also not good. Therefore, it seems that the market leader has cancelled the contracts in these origins and shifted the demand to Turkey. As a result, exporters are again expecting well over 300,000 mt (Bais kernels) exports this season. Some even speak of 340’000 mt. Assuming that the truth will lie somewhere between the most positive and most negative estimate, it seems pretty realistic that the market will have to resort to TMO stocks in the second half of the season. Should the latter act as a seller, be considered quite realistic, 30 TRY/kg as a selling price? In line with these expectations, costs rise again (from 49.5 TRY/kg to 50 TRY/kg for raw kernels of the 11-13 mm calibration).

In addition to the development mentioned above, the following factors are also important. After several bad years in the Giresun region, the harvest has been excellent again this year. Therefore, the price difference between normal Levantines and Giresunder kernels is not very big this season. Therefore, most producers now use Giresunder kernels to produce whole (roasted) kernels, especially since they can be peeled very well. The time-consuming blanching with steam will, therefore, probably not be necessary this season. In addition, there are hardly any tiny kernels this season, and also, “cheap” raw material from the old harvest is scarcely available on the market, which is also due to the late harvest. Thus, there is a lack of raw material for the “favourable” production of preparations and pastes, although this will only appear in the coming weeks/months. According to experience, these then appear again and again. Likewise, the price pressure from Europe continues to be very high.

In addition to exports, domestic business has also started up well again. Despite the high raw material prices in the local currency, hazelnut is the cheapest nut, as alternatives such as almonds are now more expensive due to the exchange rate. Therefore, processors are expecting a good year for domestic sales.

Regarding demand, we continue to have a cautious behaviour of European buyers, which can be explained by uncertainty about the further seasonal development and complex negotiations with the trade. In general, however, the season has started well. Exports are running, but the delivery situation is becoming increasingly tense due to a lack of carriers. An easing is expected only in about a month when the primary season is over.

The coming week will start interesting because we will see whether the political events further impact the exchange rate and whether the price development is passed on.