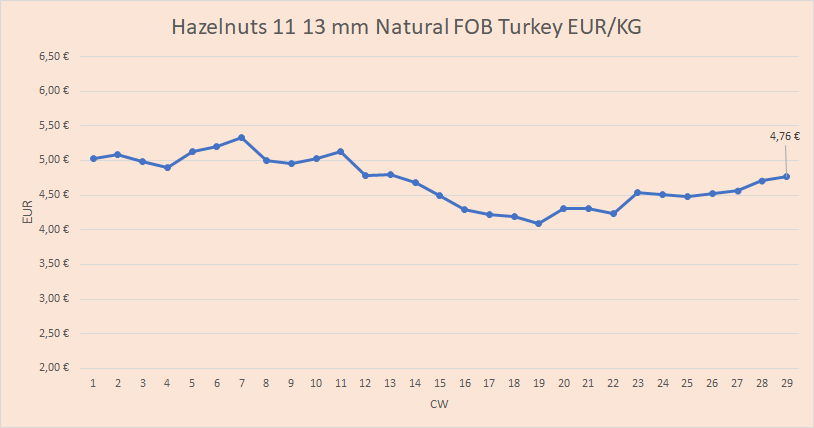 There is little to report from Turkey due to the holidays. Factories were closed for most of the week, and therefore sellers were not very active. In Europe, too, the holiday season makes for a sluggish market. Accordingly, there are few deals at the moment, although some tenders are now active again.

In terms of the commodity market, we continue to see a slow but steady increase in prices towards the expected price level. Next week, but no later than the following week, President Erdogan is expected to announce the TMO’s purchase price. The very fact that this is a “matter for the boss” suggests that there will be a gift to the farmers because negative sentiment due to a price that is too low is not something that even the strong man on the Bosporus can use at the moment. Therefore, the exporters’ expectations seem to be confirmed.

About the development of the current harvest, it currently looks as if the first farmers in the regions near the coast will only start picking and drying the kernels in about two to three weeks. Therefore, the first shipments from the coming harvest will only be possible at the turn of the month. Thus, this harvest will be available on the market about two weeks later than the last harvests, corresponding to the normal situation.

Compared to previous years, it seems that the supply situation in Europe is much better. Most buyers have a particular buffer and contracts and are relaxed about the coming season. However, there is still a great deal of incomprehension that a significantly larger harvest should be more expensive than the current one.

Looking at the exchange rate of the Turkish lira, there was little change this week compared to the previous week, partly due to the holidays. The Turkish economy is looking to the tourism sector, contributing to value creation in the country, especially in the summer months. However, the current price is already the product of an optimistic expectation, so there is certainly the potential for changes should reality look different from the forecasts.