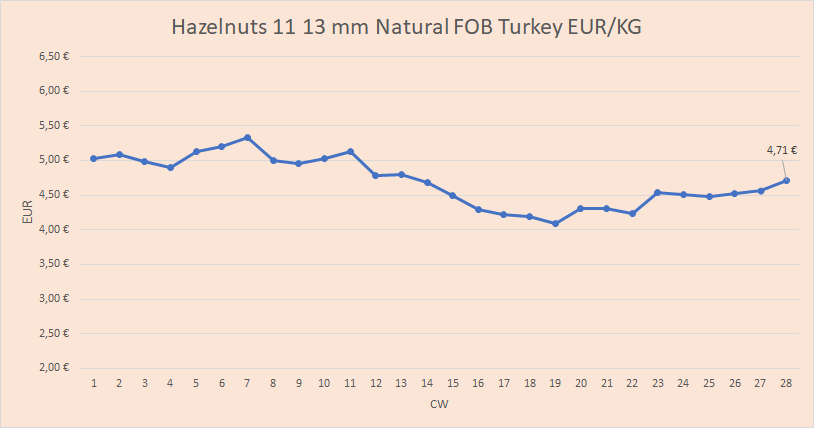 As expected, this trading week was also characterised by little activity. Exporters were on their way to the growing regions to inspect the coming harvest and report only positive things concerning the expected harvest quantity. The kernels are not yet fully formed, so that only limited statements can be made for the Hazelnuts regarding the expected kernel sizes and quality.

The Turkish central bank left the key interest rate unchanged at 19% this week. Because of the galloping inflation, a different step would have been counterproductive, even if the president had wished otherwise. Since one cannot be sure to what extent the central bank’s head can make autonomous decisions, this signal was positively received by the market, and the lira ended the trading week stronger with a plus of over 2%.

As raw material prices were more or less constant this week (natural hazelnut kernels 11-13 mm rose slightly from 47.0 to 47.5 TRY/kg), export prices in principle only rose by the inflation in the exchange rate. Overall, the Turkish government and foreign rating agencies such as Fitch and Moody’s report that Turkey is facing a rapid economic recovery. The domestic market is quite strong, but the tourism industry is recovering faster than predicted at the beginning of the year. It will be interesting to see whether this helps the lira. It is questionable how long the central bank can maintain its strict monetary policy, especially since the massive increases in companies’ producer prices do not point to an end of high inflation.

In the coming week, most factories will be closed completely or, at the latest, from Tuesday for the rest of the week for the Islamic Festival of Sacrifice. Therefore, we expect little trading activity in the coming week. After the Feast of Sacrifice, President Erdogan is expected to travel to Giresun to announce the TMO’s purchase price. If he follows expectations, which is also suggested by the Ministry of Agriculture’s harvest estimate, the announcement of the minimum price will probably be followed by a small price jump towards the new harvest, because so far, the exporters have not succeeded in bringing the current price level into line with the expected price level (this was also not desired).