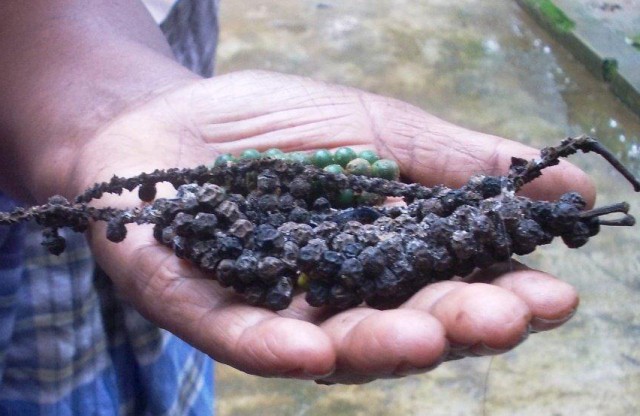 Pepper growers are concerned over the increased availability of Sri Lankan crops in the market, which made a dent in domestic prices.

The price drop was almost $0,068 per kg over the last week, forcing the consuming industry to procure more of the imported stuff to meet demand ahead of the ensuing festival season.

They attributed the reason for increased arrivals to the release of the held-up stock of around 500 tonnes of Sri Lankan black pepper by the Department of Revenue Intelligence at the Tuticorin Port during the April-May period. This consignment was released to importers of the commodity following a court order, and this pepper is now available in the market at $5,518 per kg.

Indian pepper price is now hovering in the range of $5,314-5,382. With GST and freight charge, the product is delivered to North Indian markets at $5,791.

According to growers, the domestic market is now flooded with Sri Lankan pepper including in the producing and consuming centre. The festival boom has facilitated a good demand for the commodity.

Kishore Shamji, a pepper trader in Kochi, said Sri Lankan production is expected to be good this year at 25,000 tonnes. Moreover, that country had announced a carrying stock of 12,000 tonnes last year with domestic consumption of 12,000 tonnes as per the declaration made to the International Pepper Community. Hence the commodity available for exports was 25,000 tonnes.

The weakening of the Sri Lankan currency has also forced the exporters in the island nation to offer the commodity at $4,000 per tonne against the last week’s rate of $4,300. Referring to Indian production, Shamji said the figure is estimated at 60-65,000 tonnes. The season is over, and the stock is available with farmers coming out to the market.

A spokesman of All India Spices Exporters Forum said that there is a possibility of more availability of pepper in the coming months with the advent of new crop in India early next year. The market could therefore be easier with arrivals picking up. A great deal will depend on the extent of demand in the ensuing months.