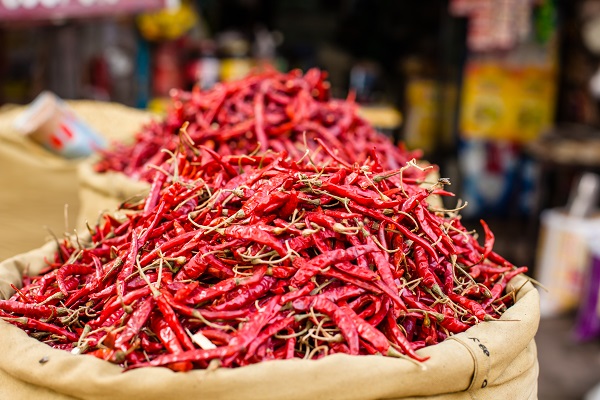 On November 15, the prices for major and deluxe varieties of Chilli rose as the demand for the crop remained firm. However, despite the increased market stock, good demand for the spice helped keep the market trend firm. Also, a quality supply of red Chilli, which is in demand, keeps the sentiment steady.

The other factor that keeps the prices for red Chilli steady is the report of the damaged crop in the market, which can lead to lower crop supply in the coming days. Due to the damage, farmers are also expecting some support from the government for crop loss.

Already there is the expectation that red chilli production will be on the higher side this year, so the stockists should start unloading their crops in phases. There is already an overflow of Chilli in cold storage due to higher prices in Telangana, Andhra Pradesh, and Karnataka. It is expected that the prices will get capped, and the buyers are waiting for prices to go down before they purchase since there is an increase in sowing areas of red Chilli in these three states.

Already the sowing area of Andhra Pradesh for the crop is reported to be at 183,550 hectares compared to the normal season’s 137,946 hectares and last year’s 139,000 hectares.

There is also the expectation that the prices will start correcting from higher levels now that the Diwali season is over, as the markets like Guntur will have a supply of red Chilli from January. Already Guntur spot market recorded 11 percent more supply of the crop than last month.

The arrival of the spice was recorded as follows:

Since its decrease on November 2 and 10, the prices have been steady. However, on November 15, the price increased between $0.02 and $0.06 per kg in the Guntur spot market for most varieties.

Even the deluxe qualities like 341, 334/S10 No.5, and Teja remained firm in their prices due to good demand.

The overall production of red Chilli for 2022 is estimated to be up by 15.10 percent this year compared to last year. For the market year 2021, the production was 1.384 million MT, whereas the prediction for 2022 red chilli production by market experts is believed to be about 1.593 million MT.

Buyers are likely to become more active with the arrival of winter and new crops in the market. New crops and an abundance of them can lead to capping the prices. However, stockists are also likely to start offloading their products in the coming days as the new crop’s arrival is likely to start from January in the Guntur market.