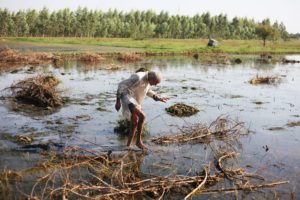 The losses have been assessed in farm operations such as harvesting, collection, sorting, grading, drying, packaging and transport; and in storage channels such as farm, godown/ cold storage, wholesaler, retailer and processing units. As per the study report, the harvest and post-harvest tosses of cereals ranged from 4.65 percent to 5.99 percent, and for pulses, the losses ranged from 6.36 percent to 8.41 percent. The loss was at 5.53 percent in paddy, 4.93 percent in wheat, and 4.65 percent in maize.

Over 5 million hectares of agricultural areas were affected due to heavy rains during 2021, according to a written reply in the Lok Sabha by the Union Minister of Agriculture and Farmers’ Welfare Narendra Singh Tomar.

The 50.4 lakh hectare area was affected due to cyclonic storms/flash floods/floods/landslides/cloudburst and others as of November 25, 2021, was from a total of 20 states.

Rains have wreaked havoc on almost all of these states, which received either ‘large excess’ or ‘excess’ rainfall this year. Karnataka, which has the highest area under crop damage, for example, received 102 percent excess rainfall from October-November, according to data by the Indian Meteorological Department.