India Is in a Thriving Position With Chilli Production 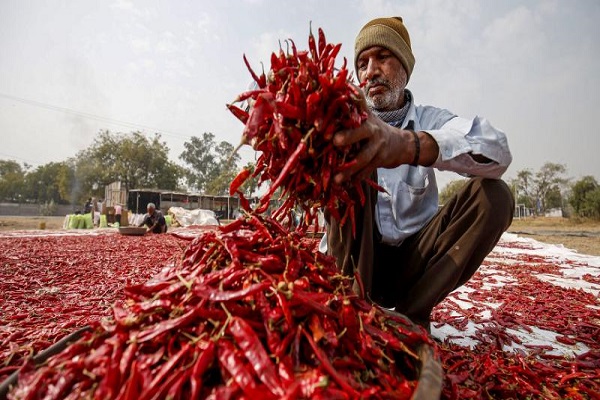 In Andhra Pradesh, the red chilies in the spot markets are comparatively higher, but the tremendous demand keeps the price stable. But the higher price is making the traders nervous. Both traders and exporters feel the higher cost of the commodity can lead to India losing out on the export demand to the other countries, mainly China.

The current market shows that the arrival of the red chilies is about 80 thousand sacks. Earlier, Andhra Pradesh and Telangana farmers hoped to achieve higher prices for the commodity. But the traders and farmers were afraid of the profit-booking selling of the spice in the coming days.

Earlier the news of the trend for profit booking and the increase in the price led to lowering of activity. It was reported that the arrival of red chilies in the Guntur, the benchmark spot market of red chilies, is expected to be reduced by 70 to 75 thousand sacks. This is now influencing the buying activity among the stockists, traders, and even exporters in the local market.

The other factor that has kept the price high for red chilies in the market, despite the arrival of the new crop, is the reports of lower crop production in South India. Andhra Pradesh, Telangana, and Karnataka reported having a weaker crop output than last year.

All these led to an increase in the selling of the commodity. Even in the larger spot markers, making the price strong.

India is currently busy meeting the domestic demands and waiting eagerly for the export requests from different countries, mainly China. The expected orders for the export can lead to profit booking for the commodity in the next few days, which can result in capping the price.

But as of now, the price keeps increasing every day green chilies too. In the Mumbai markets, the price of the spice has been rising for the last five to six months and is high by two to three times in the spot markets across Maharashtra.

In the last few years, chili production has benefited Indian farmers. Hence the sowing area has been increased. Currently, India is in a thriving position with chili production globally. As a result, it is not only becoming the leading producer of spice but also the leading exporter.

According to the Spices Board’s data, during the financial year 2001-02, the production of chilies in the country was 1 million 69 thousand tonnes, which has now increased to 2 million 92 thousand tonnes. On the other hand, in terms of exports, India had exported chilies worth about $109,67 million during the last year.

Also, the Spice Board of India’s report states Telangana is the second largest after Maharashtra. In Telangana, the attack of thrips on the crop resulted in the destruction of the produce across 900,000 acres. It is also helping the price to continuously increase. Due to the unseasonal rains in the area, there has been a significant decline in its productivity, which is also being considered an important reason for the increase in its prices. It is said that the ever-increasing fuel prices are also responsible for the rise in chili prices.

The Chilli S4 stemless prices were recorded at $2,25 per kg FOB.