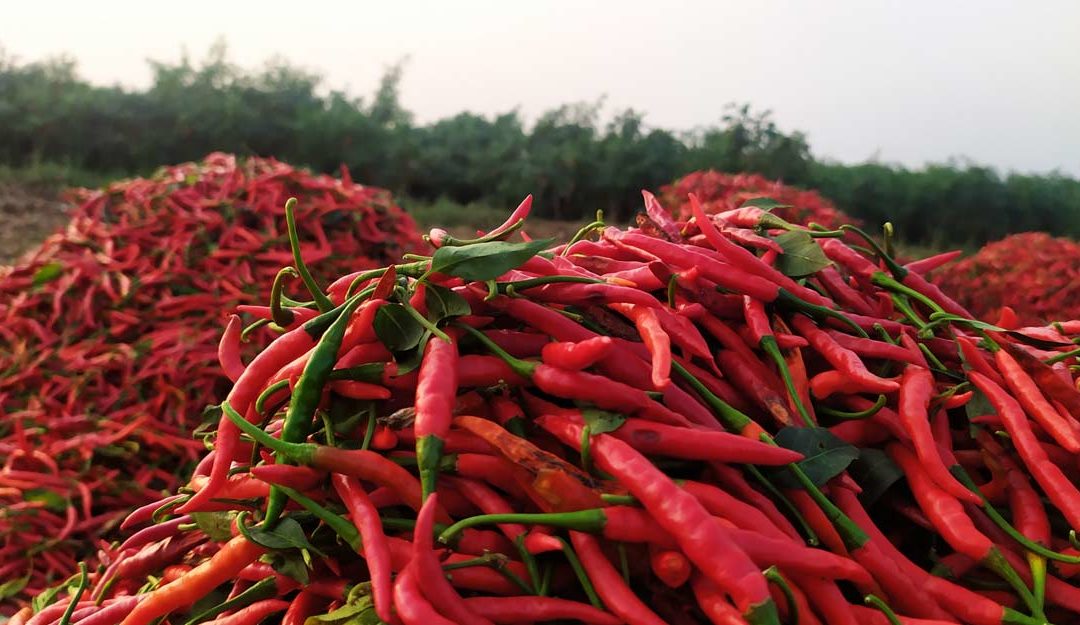 Overall, throughout the month Chilli prices were holding steady at $2,01 per kg FOB for Chilli S4 Stemless. The same variety also experienced a price increase on October 18 to $2,02 per kg FOB and had been holding the same. However, due to higher arrival of the crop amidst weak demand is affecting the red chilli prices in the market.

Despite Teja having a good run in the market for last few weeks the price is dropping now and as expected with the fall of Teja price other chilli prices are getting affected negatively. Most of the varieties are seeing a drop by $0.04 to $0.06 per kg on October 26. The only variety that treaded at a good rate was 334/S10, because it had a steady demand.

According to the traders the main reason for the chilli market going bearish is because the lack of availability of deluxe variety and more Teja is available in respect to its demand. In most markets stocks are piling up as the sales of the product is getting lower.

The upward trend that the market experienced earlier this month was due to the demand in the export for the S17 and S4 varieties. Also, with the festivals continuing, the domestic demand was good and it will continue to be steady till Diwali. But as the months progresses the prices are expected to turn softer. According to experts with higher production and overflow of last year’s products in the cold storage, the prices can get capped in the future. It has been estimated that the production of red chilli is expected to be up by 15.10% compared to last year. As a result, the production of red chilli is going to be around 1.593 million MT in 2022 compared to the previous year’s 1.3854 million MT last year. Also, it has been reported that the increase in acreage by 25 to 30 percent is mostly covered by hybrid varieties. But whatever the variety is the increase in production is likely to impact the prices negatively.

As of October 6, it was reported the chilli sowing session in Andhra Pradesh was over. It has been estimated the acreage for the sowing has increased not only compared to last year but also from the normal season’s acreage. This year the sowing is completed in Andhra Pradesh at 164,416 hectares compared to the normal year’s 137,946 hectares and last year’s 139,000 hectares.

Currently, the chillies sowed in Andhra Pradesh are between transplantation and vegetative stage.

In Madhya Pradesh, the heavy rainfall in the last few days has delayed the drying process by a fortnight to twenty days. The arrival of red chillies from Madhya Pradesh to the market will hence be delayed.

On the other hand, Karnataka farmers have also delayed sowing of the crop by 20 to 25 days in the irrigated areas so they can avoid crop damage caused by any unseasonal rains during the initial fruition stage. Good production of chillies is expected from Karnataka with most areas have reached the peak vegetative to flowering stage. Also, the market will see new arrival of red chillies from Karnataka towards last week of November.

There are also reports of 5% of crop getting damaged die to the heavy rains and require replanting, while almost 90% of the sowing is complete in Andhra Pradesh and Telangana. Also, the overall agricultural operation is believed to be on schedule.

There are other factors that can impact the price of the red chilli in the midterm of the market year apart from the weather conditions. They are how the export and domestic market opens in the coming months. Also, crop damages caused by any calamities and incidents caused due to pest and disease can eventually affect the price of red chillies.