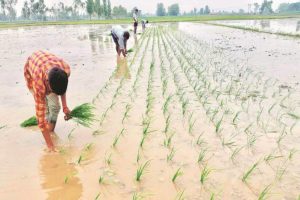 Area sown to summer crops like paddy was lagging by 1.55 per cent at 10,45 Million hectares so far in the ongoing Kharif season of the crop year 2021-22 (July-June), according to data released by the agriculture ministry on Sunday.

Sowing operation is still underway, and planting of summer (Kharif) crops can be continued till the end of August, it said.

Farmers had planted summer (Kharif) crops in 10,61 million hectares in the year-ago period.

The sowing of Kharif crops begins with the onset of southwest monsoon from June. Monsoon rainfall was lower eight per cent between June 1 and August 20, the ministry said.

However, water storage available in 130 reservoirs in the country was 96 % of live storage in the corresponding period of last year, and 99 % storage on average in the last 10 years, as per the Central Water Commission, it added.

According to the ministry, “sowing is still going on” in states growing Kharif crops with “occurrence of monsoon rains in many states”.

A majority of states have informed the central government that the sowing of Kharif crops, particularly paddy, urad, moong and sesamum castor, can be continued up to the end of August, it said.

Castor can be grown up to September 15 in Gujarat, receiving good rains for the last two days. Similarly, it added that kulfi and nizer and early mustard seed sowing could be done up to September in Jharkhand.

As per the latest data, the area sown to paddy (the main Kharif crop) remained marginally lower at 37,4 million. Hectare till August 20 of this Kharif season as against 37,8 Million hectares in the year-ago period.

In cash crops, the area sown to cotton was down at 11,7 million hectares so far this Kharif season, against 12,76 Million hectares in the year-ago period.

The sowing of Kharif crops in some places continues till September, and harvesting begins from October onwards.