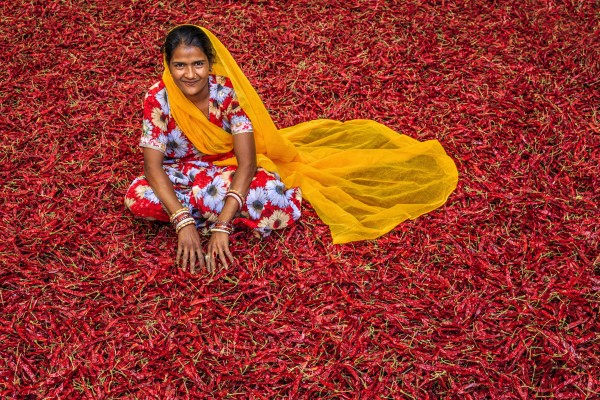 In most Indian markets, there was an overflow of red chilli bags, but the prices remained steady due to the upcoming Diwali festival. Speculations say that the price will not change this week due to the festival amidst good local demand.

While the demand for other varieties in the Byadgi market was steady, the 2043 variety traded for a lower price, and the spice sales were lower than expected.

Out of the total supply arrived at Bedia, 20 percent was reported to be of good quality while 80 percent was of fatki variety.

The weight of the bags that arrived at the market was about 35 kg each.

According to the experts, the higher arrival of the spice amidst lesser demand in the export market will eventually impact the price.

Reports suggest an overflow of spice in the cold storage in Telangana, Andhra Pradesh, and Karnataka. Due to which buyers are waiting for the price to drop further before they start purchasing and stocking up.

According to experts, red chilli fetched good prices for the farmers and traders of the crop in the last two years; they have increased the sowing areas in Andhra Pradesh, Telangana, and Karnataka.

Coming marker year may witness the cap in the prices of the crop. The sowed red chillies are currently between transplantation and vegetative stage.

The acreage for Andhra Pradesh alone is reported to have increased from 139,000 hectares last year to 183,550 hectares this year. On average, the sowing area for red chilli in the state is estimated to be about 137,946 hectares.

The overall production of red chilli for 2022 is estimated to be up by 15.10 percent this year compared to last year.