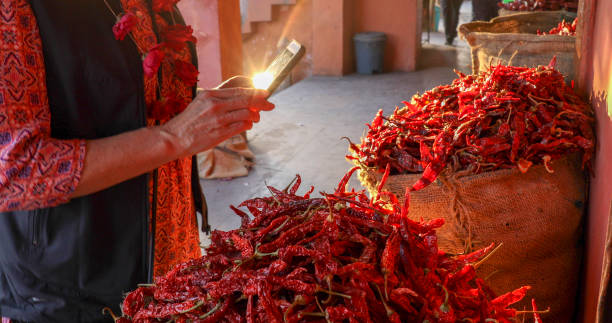 Chilli prices across India’s spot markets stayed firm with improved demand while having a lower crop supply. The lack of quality products in the market also puts the prices for red chilli towards an appreciative trend.

On November 19, the prices for the Red chilli in the Guntur market have increased. Increased demand but lower supply because of the rains in the area made the price move up. Lower spice supply in the market resulted in almost all the varieties experiencing price increase by $0.03 per kg.

It has been reported that Guntur and the nearby areas had heavy rain, which has affected the decrease in the arrival of the bags. Apart from this, the news of crops in the area getting infected by pests has also made the price bullish.

However, it is expected that when the increase in supply improves, the prices will be capped. Compared to last month, it has been reported that there was an 11 percent more supply of the crop in Guntur as stockists have started offloading their previous batch for new crops.

Given the way the Red Chilli market is faring, traders and farmers are not keen to sell their crops right now. They expect the prices to go further up before they release the crop to the market.

Warangal market was closed due to Shri Guru Nanak Jayanti.

After the market opened on Monday, there was an increase in crop buying in Guntur and Warangal.

As per trade analysts, the report on standing crops damaged due to the rain has led farmers and traders to believe the price will go firmer.

The prices in most of the varieties increased by $0.04 to $0.07 since the demand was high among the stockists.

Even the Warangal market saw good demand for the Teja variety as well as What. The only variety that had a price fall was 341, which was only by $0.01 per kg.

Previously buyers were inactive due to the higher prices, but now with new crops arriving and amidst crop damage, the buyers are getting active.

In the Byadgi market, 12,000 bags arrived of new chillies.

At Bedia, Madhya Pradesh, there was a report of the arrival of 4,000 bags.

Until November 19, the price of red chilli, mainly the Chilli S4 Stemless, was in a bearish mode since the beginning of the month. However, with the lower supply and good demand, the price is now in an appreciative mode.

In Karnataka, the heavy rains have impacted standing crops, and the expected damage is 8 to 10 percent. However, exact damage can only be stated in the coming weeks.

As a result bad weather, quality of the crop has also dropped, and in the coming days, it will support the prices. The farmers of red chilli are seeking the support of the government.

Also, it was predicted that the red chilli production will increase by 15.10 percent in 2022 from last year. However, given the recent crop damage, the total yield now remains to be uncertain. Last year India produced 1.384 million tons compared to 2022’s expectation of 1.593 million tons.