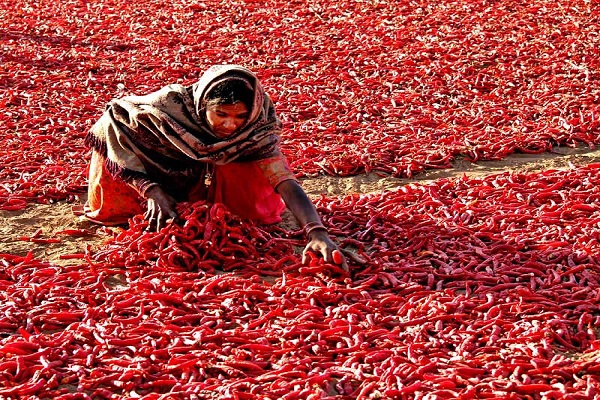 The arrivals of red chillies in the mandis of the central producing state, Andhra Pradesh, were reported to have increased once again. Even after the increase in arrivals, the prices also rose. Therefore, red chilli is expected to remain bullish in the spot markets in the coming days.

However, there was a holiday in Guntur Mandi of Ambedkar Jayanti. Earlier, 80 thousand sacks of red chillies arrived in the spot market. Farmers in Andhra Pradesh and Telangana had limited selling of their red chilli crop to get higher prices in the future. The arrival of red chillies in Guntur Mandi of Andhra Pradesh was reduced to about 70-75 thousand sacks. However, despite the increase in arrivals in Guntur, local stockists were reported to have strengthened buying.

Apart from this, the demand of exporters was also said to be supported lightly. Earlier in southern India’s significant states like Andhra Pradesh, Telangana and Karnataka, there were already fears that the red pepper crop would be weaker than usual. This was why, even after the start of the new crop, the price of this significant grocery in the spot remained high. Surprisingly, even after increasing the heavy selling by the farmers, reports of red chilli prices remained strong in other big mandis, including Guntur. However, due to the pressure of the arrival of red chilli in Guntur and support for buying, red chillies in both the central producing states have remained strong.

Andhra Pradesh’s biggest two markets, Guntur and Maneja, red chilli, were reported at $1,90/2,16 per kg. Browken was reported at $0,59/1,44. In Warangal mandi of Telangana, Teja red chilli was $1,97/2,23 per kg. Red chilli is expected to increase a little more in the coming days.