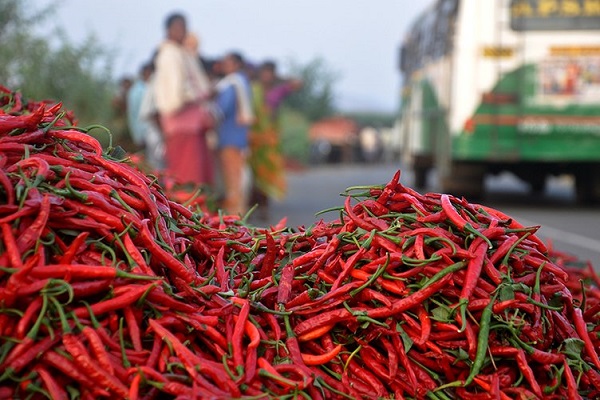 The overall red chilli sentiment in the market stayed between firm and steady during mid-month. However, earlier towards the beginning of the month, the trend went southward, but overall, the auction price for the spice remained steady.

The month started with an overflow of the red chilli bags, which led to a sudden slump in the price on the first day of November. However, because of Diwali, the domestic demand picked up. This led to the price remaining steady for the crop.

The overflow of red chilli was due to the excess stock of the spice in the cold storage in states of Telangana, Andhra Pradesh, and Karnataka. Buyers were waiting for the price to drop further before starting to purchase and stock up again.

According to experts, in the last two years, red chilli fetched good prices for the farmers and traders of the crop, they have increased the sowing areas in Andhra Pradesh, Telangana, and Karnataka.

Low crop buying once again led to the drop in the price of red chilli when the market opened after Diwali. Since then, the price has been steady, and the activity in the spot markets has increased. Due to the news of crop damage, the stockists and traders have increased their purchases.

Given the way the Red Chilli market is faring, traders and farmers are not keen to sell their crops right now. They expect the prices to go further up before they release the produce to the market.

It is evident from the trend that the price has been in the ascending mode with the news of crop damage in Karnataka.

The acreage for Andhra Pradesh alone is reported to have increased from 139,000 hectares last year to 183,550 hectares this year. On average, the sowing area for red chilli in the state is estimated to be about 137,946 hectares.

The overall production of red chilli for 2022 is estimated to be up by 15.10 percent this year compared to last year. For the market year 2021, the production was 1.384 million MT, whereas the production for 2022 by market experts is believed to be about 1.593 million MT.

The increase in production is expected to cap the price for red chillies in the coming days. However, the scenario may change due to the news of heavy rains in Karnataka thet has impacted the standing crops. It is expected the damage is going to be around 8 to 10 percent. The exact proportion of damage can be confirmed in the coming weeks.

As a result of bad weather, the crop quality has also dropped, which may support its prices. The farmers of the damaged red chilli crop are seeking the support of the government.