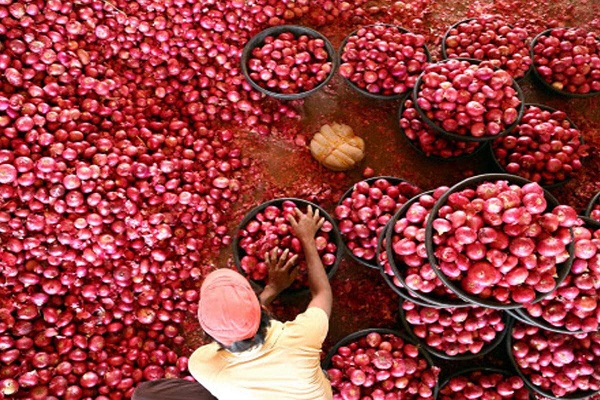 Demand for onion exports has re-emerged with domestic prices falling, but exporters continue to be affected by containers shortage and high freight rates.

“Exports are on the rise as domestic prices are ruling lower. But we are unable to fulfill our orders as containers are not available and freight charges are high,” said Ajit Shah, President, Horticulture Produce Exporters Association (HPEA).

Lower than a year ago

“The feasibility of exporting onion is low due to high freight rates, though prices of all onions – from Bellary Rose to sambhar- are dropping sharply,” said M Madan Prakash, President, Agri Commodities Exporters Association (ACEA).

Bellary Rose onions are delivered from Karnataka to Tamil Nadu at around $0,17 per kg. Big or the normal grade onions cost is around $0,13 per kg, he said.

The onion modal price or rate at which most trades took place at the Lasalgaon agricultural produce marketing committee (APMC) yard, Asia’s largest, was $7,87 a kg on Tuesday for the late Kharif arrival. Prices are about $1,31 a kg lower than the year-ago period.

According to the Ministry of Agriculture and Farmers Welfare’s first advance estimate of horticulture crops, onion production this season (July 2021-June 2022) is estimated at a record 31,13 million tonnes compared with 26,64 mt last season. The higher production is in view of the area under onion increasing this season to 19,14 million hectares from 16,24 million hectares a year ago.

The decline in prices has resulted in Mahrashtra growers demanding that onion be procured by the National Agricultural Cooperative Federation for buffer stocks at a higher price. The Centre has a scheme in place to procure up to two lakh tonnes of onion.

Buffer stocks are built to help farmers to get better prices when they plunge. On the other hand, they can be used to curb prices rise due to shortage or fears of a lower crop.

HREA’s Shah said Indian onion was quoted lower than $200 (₹15,225) a tonne. He said exporters were carrying out “one type of trade battle” as freight rates are less for some countries.

“We have not done any shipment recently as there is a lack of parity,” said ACEA’s Prakash.

A major reason is that charges for reefer containers have increased by over six times to $10,000 currently from $1,500 for a 40-foot container.

“Also, it is taking more time to get the cargoes to destinations in South-East Asia,” he said. For example, it took 15-20 days to reach Klang port in east Malaysia earlier. Now, it takes about 40 days.

Prakash said Pakistan continued to quote competitively as its currency has dropped sharply against the dollar. The Pakistani rupee is quoted at 183,50 to the dollar, while the Indian rupee is ruling at 76.10 to the greenback.

“Pakistan does not have any cargo to export now. Its new crop will arrive only after two months,” Shah said.

Despite odds, exports have picked up and are showing improvement, he said.

The rise in exports is significant after India lost ground in 2019 and 2020 following crop failure due to unseasonal rains. Then, India imposed a minimum export price and then clamped a ban to rein in the prices.

This caused problems in overseas markets for exporters, with Pakistani and Iranian onions filling the void. The Indian government also took steps to increase the area under onion, particularly in non-traditional States. One of the objectives was to ensure stable prices throughout the year.

The initiative has yielded good results, with production rising by 5 million tonnes and exports increasing.