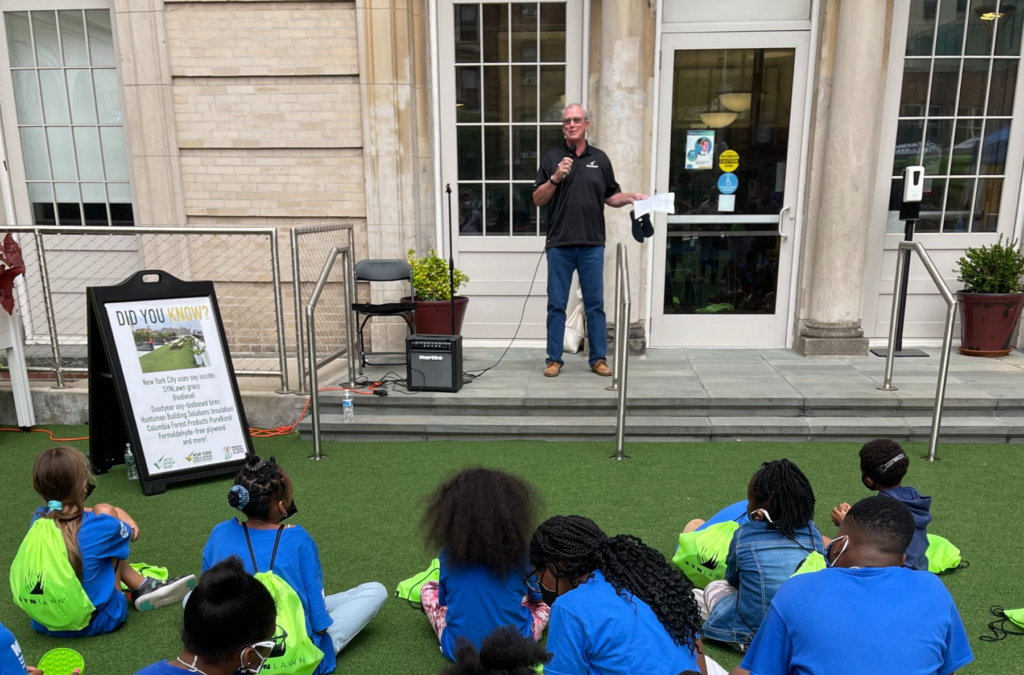 NEW YORK (Aug. 4, 2021) — In a lively schoolyard that is home to the Boys and Girls Club of Harlem, urban and rural America came together. Students who’ve only read about farmers in children’s books or sang “Old MacDonald” met actual farmers for the first time. They asked how soybeans are grown, played on newly installed soy-based synthetic grass and competed in bingo about environmental science. The event wasn’t all just fun and games, however, as youngsters also learned about a new U.S. Department of Agriculture (USDA) report showing that plant-based products, such as soy, and the biobased industry generate economic growth and jobs across America.

The USDA Rural Development report — An Economic Impact Analysis of the U.S. Biobased Products Industry — included several recommendations developed in collaboration with the soy checkoff that provided key learnings on the sustainability and performance of soy-based products.

During the Farmers on the Green event on July 29, held at the Boys and Girls Club of Harlem, soy-biobased grass distributor SYNLawn® of New York donated a new biobased play area and partnered with the United Soybean Board (USB), New York Corn and Soybean Growers Association and Indiana Soybean Alliance for the celebration. As a result of SYNLawn’s long-term collaboration with USB, children learned about science, soil, biodiesel and soybeans at six learning stations, and participated in games to gain real-world agricultural knowledge through interactive demonstrations and STEM activities.

“SYNLawn New York was so proud to partner with USB, the Boys and Girls Club of Harlem and the John Bowne FFA Chapter,” said owner Anastasia Phillips. “We are a long-standing participant in the USDA BioPreferred program, and are excited that this event created an opportunity to educate children and adults as USDA Deputy Under Secretary for Rural Development Justin Maxson released USDA’s new report with us at the Boys and Girls Club.”

According to the report, the biobased products industry:

During the New York City event, USB Vice Chair Ralph Lott II — who farms in Seneca Falls, New York —  talked to the students about how soybeans are used to make 1,000 different products, such as a pair of sandals he showed them. In the USDA Biobased Products report, one of the case studies highlights the soy-based Okabashi® brand, stating: “These shoes are molded from a proprietary, recyclable material that is 45% soy by weight. All of the company’s shoes now use the soy-based material as a replacement for the petroleum-based component of the materials — a fact that shows that the company is living up to its environmental values.”

“As a farmer, I am continually amazed by the versatility of our soybeans and how they help hundreds of companies, like SYNLawn, with their sustainability, performance and health attributes,” said Lott. “USDA’s new economic analysis shows that plant-based products help farmers grow demand for soy and create a platform for innovation and agriculture to grow together, while creating jobs in rural communities.”

While in New York for Farmers on the Green, checkoff leaders also met with biodiesel and biobased products users. This included the fleet leadership team for New York City, which is a long-term biodiesel user and has switched to hundreds of Goodyear’s soy-based tires and other soy-biobased products for its fleet. In addition, the New York Fire and Parks Departments collaborated with USB and the Indiana Soybean Alliance on New York’s first demonstration of PoreShield™, a concrete durability enhancer made with soy, at the historic Fort Totten Park to offer sustainable protection from salt, ice and water damage.

About United Soybean Board: United Soybean Board’s 78 volunteer farmer-directors work on behalf of all U.S. soybean farmers to achieve maximum value for their soy checkoff investments. These volunteers invest and leverage checkoff funds in programs and partnerships to drive soybean innovation beyond the bushel and increase preference for U.S. soy. That preference is based on U.S. soybean meal and oil quality and the sustainability of U.S. soybean farmers. As stipulated in the federal Soybean Promotion, Research and Consumer Information Act, the USDA Agricultural Marketing Service has oversight responsibilities for USB and the soy checkoff. For more information on the United Soybean Board, visit unitedsoybean.org.

Mace Thornton at United Soybean Board.