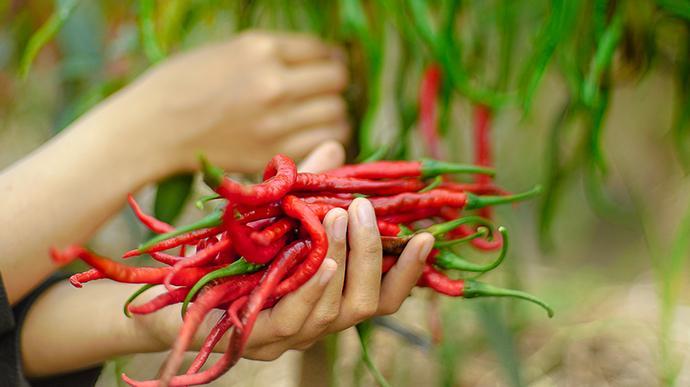 Despite the buyers being inactive in the market due to the current high price of the red chillies, the market was steady.

In Guntur, except for the No.5 variety, the price was steady for most other varieties. Also, there was poor demand for the super deluxe types like Syngenta, Byadgi, 341, 273, and 4884 due to the poor availability of the products in the market. In the Byadgi market, new chillies arrive with 15% moisture, thus making the buyers wary of buying them.

The deluxe qualities that were available and were in good demand were Teja, No.5, S10, and 334.

In Warangal, there was an increased demand for W.Hot varieties, and also pickle makers purchased the No.5 variety in the market.

As the result of good demand for most available products, the red chilli market was steady. Furthermore, in Madhya Pradesh (M.P.), the yield of red chilli is expected to be higher than last year, and the market will see new crops from the region from October onwards. In M.P., farmers are not eager in green chilli picking because of the lower price it is receiving this year. Compared to last year’s $0,41 – $0,48 per kg, this year, the green chilli is being sold for $0,16 -$0,19 per kg. With the farmers waiting for the red chillies to attain their full maturity and not picking green chillies, the production of red chilli will go up in M.P.

In Andhra Pradesh (A.P.), the chilli sowing and plantation are underway. On September 15, it was reported, 104,507 hectares of chilli were sown so far, which is higher than last year’s 96,044 hectares. On average, chilli planted in A.P. is about 137,946 hectares every season. Hence this year, it is less than that.

In the coming days, the prices of red chilli will be impacted by two factors. First, the export demand, if it increases, then the prices are likely to improve. Compared to last year, the red chilli price is down. The second factor is the price of the premium quality Teja. If the Teja variety price drops, analysts predict the rest of the red chilli price will take a southward turn.

The Chilli S4 stemless prices were recorded at $2,01 per kg FOB.