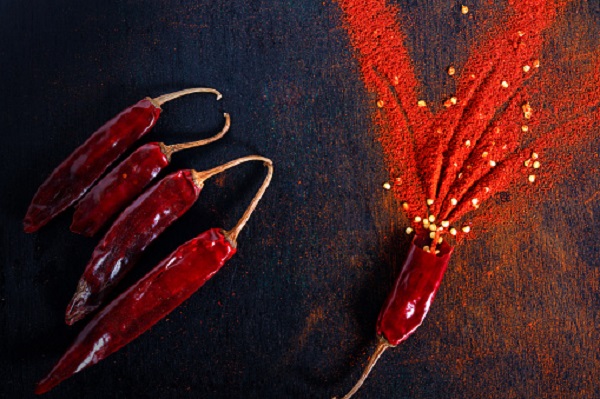 With the weak arrival of the spice, the prices of the Red Chilli variety have gone up. The price increase was witnessed with good domestic demand for the crop. Furthermore, with stockists getting active in the market after the reports of crop damage due to heavy rain in South India, the price was bullish for red chilli.

The other reason that led to the price increase of the spice is the report of pest attacks on the crop in some parts of the growing regions.

The arrival of the bags across all the spot markets in India was less, and there was a limited supply of the best and deluxe quality red chilli in the market. However, it was reported that the market was similar for the Fatki quality and its quantity is more among the new goods.

Before the price hike on December 6, the market had been going steady. The price has been staying steady because the activity in the spot markets has increased. Stockists and traders have increased their purchases due to news of crop damage and are stocking up good quality products as much as they can for the future. As a result, the market for Red Chilli has been in an appreciative mode, and it is expected to stay that way in the coming days.

This week 245 Tons chilli bags of 50 kgs each arrived in the market.

The prices of red chilli in the Guntur market increased by $0.03 to $0.13 per kg. In Warangal too the prices were higher for all the varieties. The price for average quality dropped by $0.07 per kg because of poor quality of the product that arrived in the market.

The overall production of red chilli for 2022 is estimated to be up by 15.10 percent this year compared to last year. For the market year 2021, the production was 1,384 million MT, whereas the prediction for 2022 red chilli production by market experts is believed to be about 1,593 million MT.

However, the acreage for Andhra Pradesh alone is reported to have increased from 139,000 hectares last year to 183,550 hectares this year. On average, the sowing area for red chilli in the state is estimated to be about 137,946 hectares.

The increase in production was expected to cap the price for red chillies in the coming days. However, the scenario might change due to the news that heavy rains in Karnataka have impacted standing crops, and it is expected the damage will be by 8 to 10 percent.  However, the exact proportion of damage can be fathomed in the coming weeks.

As a result of the bad weather, the quality of the crop has also dropped, and in the coming days, it will support the prices. The farmers of red chillies where there has been crop damage are seeking the government’s support.