The stable Indian commodities of the week 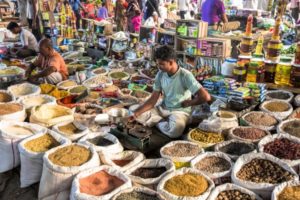 Starting from the Turmeric, 1,022,530 kg were the arrivals from which 524,300 kg was from Telangana. The poor quality of the turmeric made the prices stable. Although, the demand was high in comparison to the regular supply. As farmers were disinterested in selling turmeric at low prices, no arrivals were there in the markets of Duggiraja. However, the Kesamudram market received top quality arrivals.

The start price of turmeric was FOB $1,15 /kg as the prices were stable, so the end price was the same as the start price.

Looking at the red chilli, 41,800 kg was the total arrivals this week, and Maharashtra was the maximum contributor with 17000 kg as no exports were demanded, so the demand for chilli was less. The demand for the No.5 variety and Teja were back to normal. The Teja variety was demanded in the Guntur market, and the No.5 variety gained its demand from Tamil Nadu traders from counter sales. So, Teja variety’s price got higher amongst the other varieties. Also, farmers were not willing to sell 334 varieties at given prices.

The other big update of Pakistan chilli will enter the Chinese market with 300,000 kg of chilli.

Black pepper was also stable this week, with total arrivals of 9,530 kg, of which 5,000 kg was from Karnataka.

The market was steady with the steady demand, although the prices were higher than the last week.

Just like turmeric, red chilli and black pepper, chickpeas were also stable. The total arrivals of the week were 441,490 kg, from which 430,690 was from Madhya Pradesh.

The domestic demand supported the market trend. Amidst the steady prices, they were higher than the last week. As the festive season will start soon, there are high chances of domestic market demand for more chickpeas in the coming month. The start price and the end price of chickpeas was stable, i.e. 42-44 (12 mm) FOB $1,23/kg.