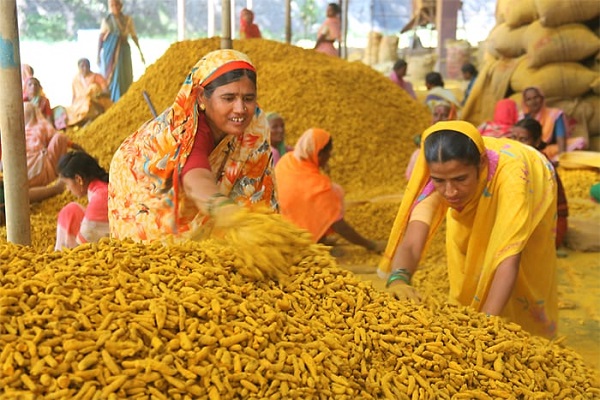 The overall sentiment for Turmeric and its varieties were sold for a better price than last year. The lowering of the last year’s stock in the market has helped in keeping the price in appreciative mode. Though there has been a lowering in the sowing area of the crop, good production is expected for it. As of now, the reports suggest the crops are of good quality, and there is no news of any crop damage that can affect the final production of Turmeric in the growing regions.

Overall Scenario Of Turmeric For The Year

Several factors resulted in the price moving upward compared to last year for Turmeric. They were:

Arrivals In The Market

Nizamabad, the benchmark of the Turmeric market, reported having received 86,262 MT of the crop between January 1 and December 7, 2021. Last year, the arrival was quoted to be 80,255 MT during this period. Hence this year, the market has 7.48 percent more crop arrival.

The prices were impacted since the market was closed between March 23 and May 18 for the COVID-19 lockdown.

It has been reported that the sowing for the current year for Turmeric is about 12,841 hectares which is less than last year, i.e., 12,367 hectares. Compared to the average sowing of Turmeric, which is about 19,551 hectares, it is significantly less this year.

Experts predict that since the prices are on the higher side, farmers can start selling their crops aggressively, bringing down the price below the forecasted range between  $94.37 and $107.47 per 0.1 MT.

The National Commodity and Derivatives Exchange has ended the turmeric future for November delivery at $98.62 per quintal, which is 1.70 percent higher than the price settled for an average year and $96.16 per quintal for December.